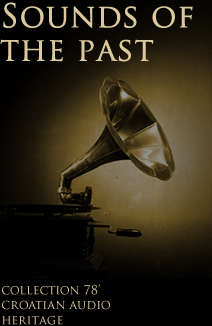 The project entitled Hrvatska glazbena baština u zvuku – digitalizacija najstarijih gramofonskih ploča na 78 okretaja (Croatian Musical Heritage in Sounds: The Digitisation of the Oldest 78 rpm Gramophone Records) was launched in 2009 with the support of the Croatian Ministry of Culture and with the aim of protecting and making accessible an important part of Croatian musical heritage. The collection of 78 rpm gramophone records preserved at the National and University Library in Zagreb was until now unavailable to the wider public and owing to a lack of adequate sound reproduction equipment their content was equally unavailable to the Library’s users. Not being able to make available for use library resources is not in accordance with the principal objectives of the Library, especially when it comes to resources and materials of particular historical and cultural significance which mark the beginnings of sound recording and music publishing in Croatia. A digitisation project asserted itself as the only solution for protecting and making permanently accessible this valuable part of Croatian audio heritage. Here you can learn more about the results of this project, listen to digitised sound recordings of music and speech originally published on 78 rpm shellac gramophone records, see how the originals looked like (labels and covers of records) and obtain high-quality metadata as well as bio-bibliographic and contextual data.

Materials available on the website represent the earliest recordings in Croatian music publishing that were published by the Edison Bell Penkala company founded in Zagreb in the 1920s. They provide us with a valuable insight into national music publishing and musical repertoire from the beginning of the 20th century, showing Croatia’s affiliation with major European musical influences and reinforcing Croatia’s place on the cultural map of Europe of that period.